Lower Lough Erne is the largest of the lakes within the Geopark and its shores offer a profusion of natural and cultural heritage sites to visit ranging from early Christian settlements, Plantation castles, nature reserves and forests. This exceptionally beautiful route takes you round Lower Lough Erne in its entirety, taking in many of the amazing sites and vistas.

Enniskillen Castle, situated beside the River Erne in County Fermanagh, was built almost 600 years ago by the ruling Gaelic Maguires. Guarding one of the few passes into Ulster, it has been strategically important throughout its history. Today, the historic site houses two museums, Fermanagh County Museum and The Inniskillings Museum. Please note that part of our site is being refurbished and will reopen in Summer 2016. Enniskillen is a great place to spend a day with excellent shopping, restaurants, coffee bars, pubs and boat tours.

Devenish Island can be reached by water bus from Enniskillen. Devenish is one of the finest monastic sites in the north of Ireland, and can be traced back to the 6th century when it was founded by Saint Molaise. Located on what was then one of the busiest waterways in Ireland, the monastery became a centre of religious teaching. However, it was raided by Vikings in 837 and burned in 1157, but, flourished in the Middle Ages as Saint Mary’s Augustinian Priory. Many of the present buildings, including the magnificent round tower, date from the 12th and 13th Centuries and contain fine examples of Romanesque carving. It is reputed that one of the Romanesque windows can now be found at Monea Church (see Fermanagh Uplands tour).

Castle Archdale Forest and Country Park are located on the shores of Lower Lough Erne in an area steeped in history. Lough Erne played an important role during World War II as the most westerly flying-boat station in the United Kingdom. Castle Archdale was the main base for aircraft flying far out into the Atlantic Ocean to protect vital convoys. A Catalina from Castle Archdale played a key role in the sinking of the German pocket battleship Bismarck. Castle Archdale is a much more peaceful spot these days with an abundance of nature trails, including woodland and lough shore walks.

White Island is an important island located to the north west of Castle Archdale Country Park. It was the site of an early Christian Church and probably a monastery. It is most widely renowned for its carved figures which have come to light in the 19th Century and have been much illustrated and discussed. It is believed that the figures may have their roots in the pagan past but, almost certainly are early Christian and portray biblical messages. The island is well worth a visit and can be accessed by boat. A ferry service is available from Castle Archdale Marina which typically operates from Easter until the end of September each year.

Drummoney Falls is one of the many waterfalls that can be found throughout the Geopark, and is a tranquil haven for a short walk. The stepped profile of the river is due to the horizontal layers of sedimentary rock that make up much of this part of Fermanagh, all of which are being slowly eroded by the massive force of the Bannagh River.

Boa Island is the largest of the islands in Lough Erne, and is connected to the mainland by the A47 road along the northern shores of Lower Lough Erne. The name of the island is a derivation of Badhba’s Island, after Badhba, the Celtic goddess of war. Boa Island is most famous for its carved stone statues known as the Boa Island figures, found together in Caldragh graveyard which is clearly signposted. Although the figures are now within a Christian graveyard they are thought to represent pagan deities. The larger of the stones is referred to as a Janus figure as it is similar to the Roman two-headed deity Janus, but it is thought to represent a Celtic god or goddess.

The eerie ruins of Castle Caldwell dating back to the Plantation of Ulster in 1612 give this delightful forest its name, but there is a lot more to this forest than first meets the eye. Evidence of the busy history of the Castle Caldwell estate are still evident with large limekilns and the remants of ornamental fish ponds, as well as small jetties where peat for the castle fireplaces was brought in via Lower Lough Erne. All of this can be seen from the beautiful loughshore walk which also allows visitors to experience the wealth of native plant and wildlife species that led to this area being incorporated into the Lower Lough Erne Nature Reserve, which is managed by the Royal Society for the Protection of Birds.

From the Irish Beal Leice meaning ‘mouth of the flagstones’, Belleek is the most westerly village on Lower Lough Erne, marking the exit of the River Erne before it flows west to Ballyshannon and into the Atlantic Ocean. The name comes from the flagstones that were once found in the river bed before it was blasted out to increase the flow of water to the hydroelectric power station in Ballyshannon. The village is most famous for its parian china produced at Belleek Pottery, the oldest pottery in Ireland. The location of the pottery is no accident as all of the raw materials necessary for production were at one time sourced from the surrounding area.

Magho Cliffs are a 9km long limestone escarpment that is a key landmark of the Geoaprk and best seen from the road that follows the southern shore of Lower Lough Erne. The escarpment is made up of two bands of limestone that formed approximately 330 million years ago, when Ireland would have been covered by a shallow, tropical sea. Magho cliffs support many plants including the Irish rock-bristle, a black moss found on wet calcareous rocks such as limestone.

Tully Castle is one of several Plantation Castles in the Geopark and is the impressive remains of a fortified house and bawn (fortified enclosure) built for the Hume family in the early 17th century. The castle was attacked by the native Maguire’s in 1641 and it has never been lived in since. The site now contains a restored 17th century-style garden which has been recreated for visitors, in addition to a small visitor centre with an exhibition relating to the castle. There is also a pleasant circular walk along the lough shore through native woodland.

Ely Lodge Forest is owned and managed by Forest Service as a recreational site as well as a working forest. Until 1987 the nearby Ely Lodge was a favourite summer retreat for the Duke and Duchess of Westminster and their children, and is now a private residence with chalets to let. The forest contains a delightful mix of coniferous and broadleaved trees with each season bringing its own atmosphere to this beautiful lakeside forest. Ely Lodge Forest offers a number of recreational opportunities including coarse fishing pegs and two walking options, a lough shore walk (part of which is wheelchair accessible) and the other more challenging route to the Carrickreagh Viewpoint. 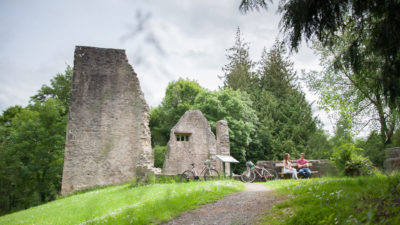 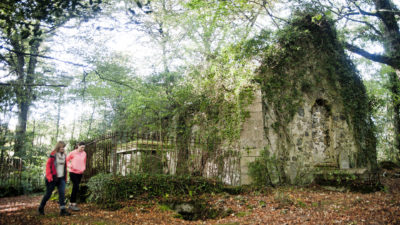 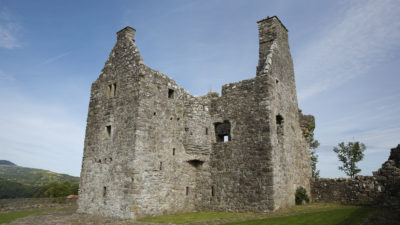 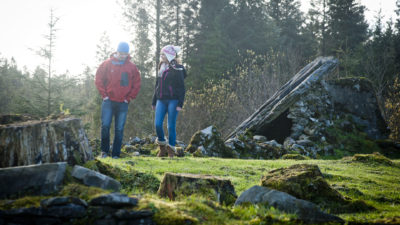 The Burren Forest is undoubtedly one of the most important archaeological sites ...