Cuilcagh Mountain Park takes in 2,500 hectares on the northern slopes of Cuilcagh Mountain, at the heart of the Geopark. Cuilcagh Mountain Park was founded in 1998 with assistance from the European Union’s LIFE Peatlands Project and the Heritage Lottery Fund, to restore damaged peatland, to conserve pristine blanket bog and to increase awareness of bogland habitats and wildlife. At 665m (2188 feet) above sea level, Cuilcagh is the highest point and the only true mountain in this part of the island of Ireland.

The Cuilcagh Way is a waymarked route that stretches for 20.5 miles through a breath-taking patchwork of habitats in west Fermanagh. The route provides stunning views, fascinating geology, mystifying wildlife, captivating archaeology, and natural history and can be walked in sections as shown below.

For safety, conservation and insurance reasons, walk leaders and event organisers are not permitted to organise, advertise, or run an event of any nature in, or along any section of the Cuilcagh Way, where participants exceed 20, without prior written consent from the Marble Arch Caves. Application forms are available from the Marble Arch Caves and should be submitted well in advance of a planned walk or event. Please contact mac@fermanaghomagh.com for more information. 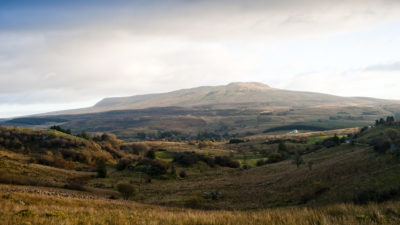 A way marked linear route that will appeal to experienced walkers who enjoy spe... 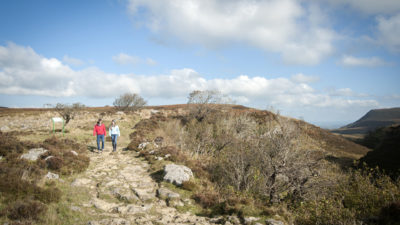 A way marked linear route through some of Fermanagh’s finest scenery, showcasing...

The base of Cuilcagh Mountain is formed from limestone. As you walk up the mountain track towards the summit, the rocks change to mudstones and siltstones, with sandstone at the top. These rocks formed over 340 million years ago when the land that is now the island of Ireland was covered by a shallow tropical sea near the Equator. The remains of billions of tiny sea creatures drifted down as fine sediment and collected on the seabed to form limestone. As sea levels fell the tropical sea was replaced with tidal flats, and then by a humid river delta eventually forming other sedimentary rocks – mudstones, siltstones, and sandstones.

Over time, the land pushed up out of the sea and moved north away from the Equator. Later still, the Irish landscape was altered by the erosive forces of nature including successive Ice Ages when massive ice sheets gouged the rocks beneath them. While these rocks are common in the island, it is very unusual to find such a complete sequence all in one place. It is quite mind-boggling to think that as you ascend to the summit of Cuilcagh Mountain, you are climbing up through geological time, covering a period of about 8 million years in just less than 700m. All within a few hours!

Cuilcagh has many different natural habitats which makes it a perfect place to enjoy nature. From the summit, there are breathtaking views of the surrounding countryside, including a sweeping expanse of blanket bog, stretching like a huge cloak across the middle slopes of the mountain. This is one of the largest blanket bogs in Northern Ireland and one of the most intact blanket bogs in Western Europe.

Blanket bogs are wet, squelchy places where the peat forms from the remains of mosses and other plants in a layer typically 2-3m deep and supporting unique plants, animals and insects that are adapted to the water-logged ground. Blanket bogs usually exist alongside other habitat types and on Cuilcagh, areas of heath are commonly mistaken for blanket bog as they contain many of the same types of plants and animals. Montane heath is an extremely rare type of heathland, found on the summit of Cuilcagh Mountain, which is one of only a handful of locations in the island of Ireland.

Many streams and rivers flow off the upper slopes of Cuilcagh through the blanket bog and sink into the limestone carving out a network of hidden caves. The lower slopes of Cuilcagh are dominated by rare limestone grasslands that are awash with colour when wildflowers and herbs burst into life in the Spring. Cuilcagh also supports a diverse range of animal, bird and insect life including the rare Golden Plover.

Human influence on Cuilcagh Mountain dates back to the Neolithic farmers (4,000 – 2,500 BC) who constructed many megaliths, or stone tombs used as burial places. Bronze Age (2,500 – 500BC) people built large burial cairns that are located on the western and eastern ends of the summit. Later evidence of human occupancy is sketchy until medieval times when the Irish population was high, and land was at a premium. More recently, the Irish Famine in the mid-19th Century forced people to abandon the land so all that remains of their once thriving rural community today are derelict stone farm cottages and field walls.

As well as being in a Geopark, Cuilcagh Mountain is designated as an Area of Special Scientific Interest (ASSI) Special Area of Conservation (SAC), a Natura 2000 site and a RAMSAR or wetland of international importance. All reflecting the fact that Cuilcagh hosts and is home to many rare species, natural habitats, and geological features. The Geopark is committed to the conservation of both the Cuilcagh landscape and the fine caves that lie beneath it. Please help us preserve and protect it for future generations. 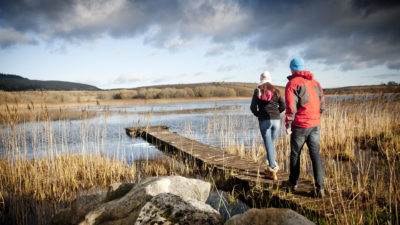 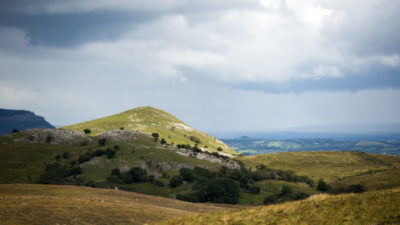 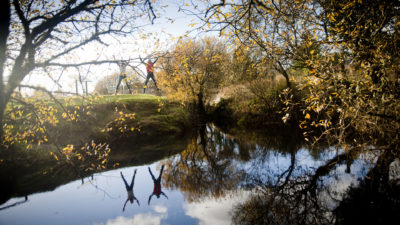 As the surface rising of Ireland’s longest river, the Shannon Pot’s fame can be ... 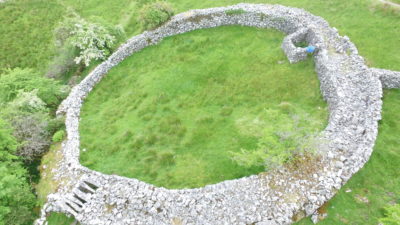 Distances are from Cuilcagh Mountain Park